In 2017, as the Head of Grade 2 at Northwood Primary School Ms Juanita Gesoond was part of the Edufundi mentorship programme. During this time she attended the Creative Classrooms workshop, which gave her additional strategies for effective teaching and learning.

At the end of 2017 Ms Gesoond moved to Delta Primary to take up the position of Head of Department for the Foundation Phase. In this particular role she has since been able to use the Teach Like a Champion techniques she learned from her mentor and pass them on to her colleagues at her new school. She has also implemented and shared the Creative Classroom ideas.

One day in class, while the learners were working on phonics, life skills and language structure, Ms Gesoond noticed that they had been sitting for a while and were beginning to get fidgety. It was time to get creative. She had all the students stand up with her and walk to an imaginary garden. In the garden there was a big apple tree and the juiciest apple was right at the top. As a class they all successfully “picked” the apple. Then they copied her actions to clean, wash and dry their apples before taking big bites out of them. As everyone “ate” their apples, they realised they were rotten! So together they pretended to throw them into the bin.

Noticing that the learners were enjoying the story thus far, Ms. Gesoond guided them to their seats for the calming part of the activity. She had them all close their eyes and imagine what treat their mom or dad or granny had prepared for them to replace the apple. The learners kept their eyes closed as a piece of white paper was placed on each of their desks. On the count of three all eyes were opened and they got the chance to draw the treat they had imagined. 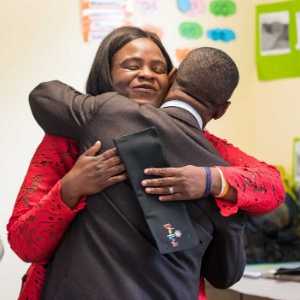 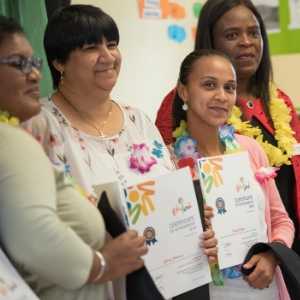 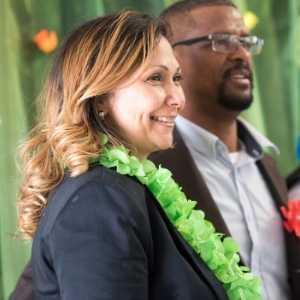 As the day went on, Ms. Gesoond repeated the activity of having learners close their eyes and listen to the silence to regroup themselves. She asked them, “What do you hear?” The learners replied, “Nothing.” From there she was able to explain, “That is how it’s supposed to be when we have to complete our written work.”

This all speaks to the practical, transferable application of the skills the mentees on the Edufundi programme can learn, benefit from and share. Such is the power of this learning opportunity.