It was a truly intimidating experience for the Edufundi team when we first walked into Ludwe Ngamlana school four years ago. The school had a staff component of 48 teachers that catered for 1500 learners, so we weren’t sure how we were going to make a difference given the size of the school. Besides being abnormally large, the school is also situated in a very troubled part of Khayelitsha, with an ever-increasing number of informal dwellings mushrooming along Baden Powell Drive.

This school serves as a beacon of hope for many destitute families who face a daily battle to put food on the table and to ensure their children receive a decent education. Unemployment is rife in the area and many learners have parents who are young, single, sick or unwell, making this a tough environment in which to work. One of the remarkable attributes of the staff at Ludwe Ngamalana is that, despite the immense challenges of the neighborhood in which they work, they still maintain a positive attitude.

“When I talk to my educators I no longer think, ‘I’m going to hear bad news’. Now they are always sharing good news,” says Mrs Mtimba-Dube, who has been the principal of Ludwe Ngamalana for the past nine years. “I’m here for eight hours so I’m here to enjoy. I can’t come and be frustrated, because then I won’t deliver.”

Mr Davendra Rampersad, the Circuit Manager at the school, echoes the principal’s sentiment. “This school is excelling. It came from a poor base, but over the last four years you can see (from the systemic results and the functionality) that they have been pushing that bar higher. That’s the difference here. They are very charged, very motivated and focused,” says Mr Rampersad. “There is good leadership and the teachers have their act in order – they know why they come to school. They are doing remarkably better than many other primary schools due to Edufundi’s intervention.”

The incredible upswing in learner results is not the only positive to come out of the school’s successful partnership with Edufundi – there has also been a tremendous boost in teacher morale and Mrs Mtimba-Dube believes that teamwork played the key role in terms of the school’s systemic results. “Discipline, the attitude of teachers and learners, and the passion that was ignited and activated has grown drastically thanks to Edufundi. I believe it is the best partnership we have ever had – we can see the change. Everyone is geared up to say, ‘I belong to this school’. It has been integrated into our school culture,” adds Mrs Mtimba-Dube.

“There is good leadership and the teachers have their act in order – they know why they come to school. They are doing remarkably better than many other primary schools due to Edufundi’s intervention.”
Circuit Manager
Mr Davendra Rampersad

The teaching staff at Ludwe Ngamlana are a mixture of experienced teachers and some teachers who have come from very challenging backgrounds but who found their way into teaching, such as Grade 3 teacher Ms Ndila.

“I had no parents, so after matric I found work as a domestic worker, but I wanted to be more – I wanted to be an educator,” says Ms Ndila, whose employer loaned her money to enable her to study at CPUT. “I am new to mentoring, but in a short time I have learned a lot – how to control discipline in my class, daily routine and getting 100% listening. Before there was chaos and it took time to control 43 learners – we were wasting time, it was difficult and sometimes I was scared to teach. It was tense, but my mentor helped me.”

Mrs Nontantobuzo Majikija is a Grade 7 teacher with 14 years of experience who used to teach fashion design at an ABET school before a colleague suggested she train to be a teacher because of her love for people.

“I wish I had done it before! I love to help when people have a problem,” says Mrs Majikija, who has been mentored for one year by Mr Phillip Manenge, an Intermediate Phase Mentor. “When there is someone in class with you for the first time you are nervous. I was nervous for the first 20 minutes, but after that I felt free when I saw their democratic way of doing things. Our environment is difficult, so if a teacher is not strong he will resign, but Edufundi has brought very good strategies to us.” 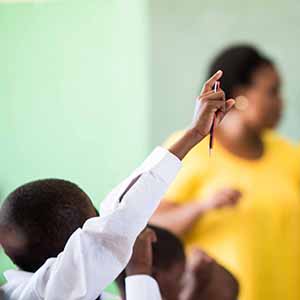 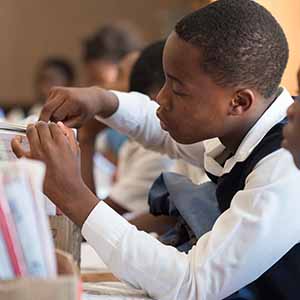 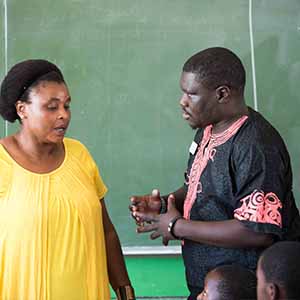 “At university they never tell teachers about classroom management or the psychological side of the child, which plays a major role in the teaching environment. They never tell them the METHOD of teaching, only the content,” adds Mr Manenge. “Mentorship helps because you can copy someone, or have someone there to give you suggestions.”

Mr Manenge is also mentoring Ms Anethemba Mvandaba, a Grade 6 and 7 Maths teacher in her fourth year of teaching, and 2018 was her first year on the Edufundi programme. “Do I like teaching? Like is an understatement – I love it! I realize this is where the foundation is laid – these kids need my help,” says Ms Mvandaba, who had a tough time adjusting to working with a mentor. “I was very uncomfortable in the beginning, but then he assured me that he was here to assist, not to judge, so we could co-teach. He didn’t want to make me feel small in my own classroom, so he usually raises his hand like one of the kids, then he will add whatever he thinks is worthwhile for the lesson.”

These important relationships of trust that have been established between the mentees and the mentors have led to dramatic improvements in their results. One such relationship is that of our Foundation Phase mentor Tandiwe Mguli and her mentee, Mrs Nobuntu Mananga.

“When my mentor was positioned in my class I didn’t like the idea. I thought, ‘Why? I know what I’m doing’,” recalls Mrs Mananga. “As time went by I noticed that it was not for me – she was here for the better performance of the school. Everything I wanted to ask her she showed me, especially in catering for different learners according to their ability. I had been just teaching the same thing for everybody, but she taught me how to deal with different levels,” adds Mrs Mananga, who achieved 100% in the 2018 Grade 3 Systemic evaluations and 92% in Literacy. 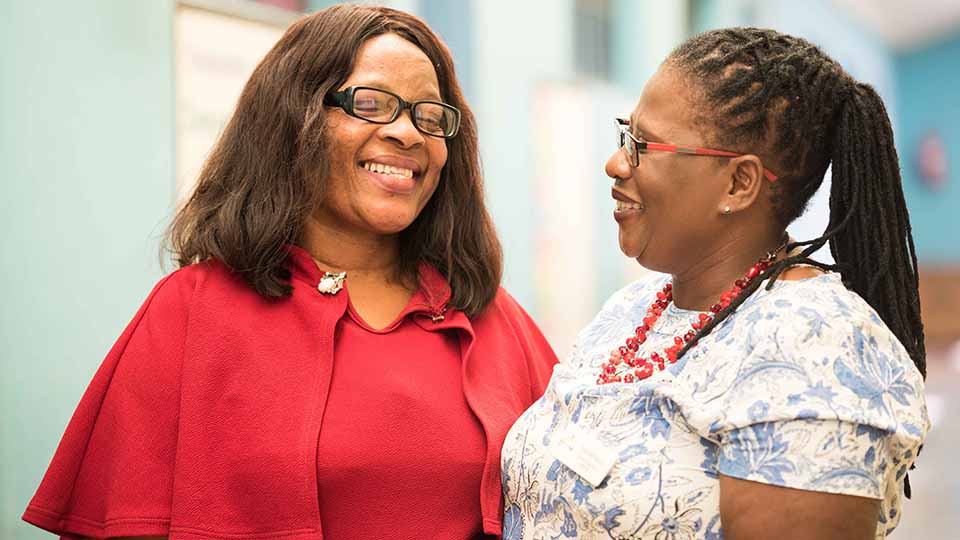 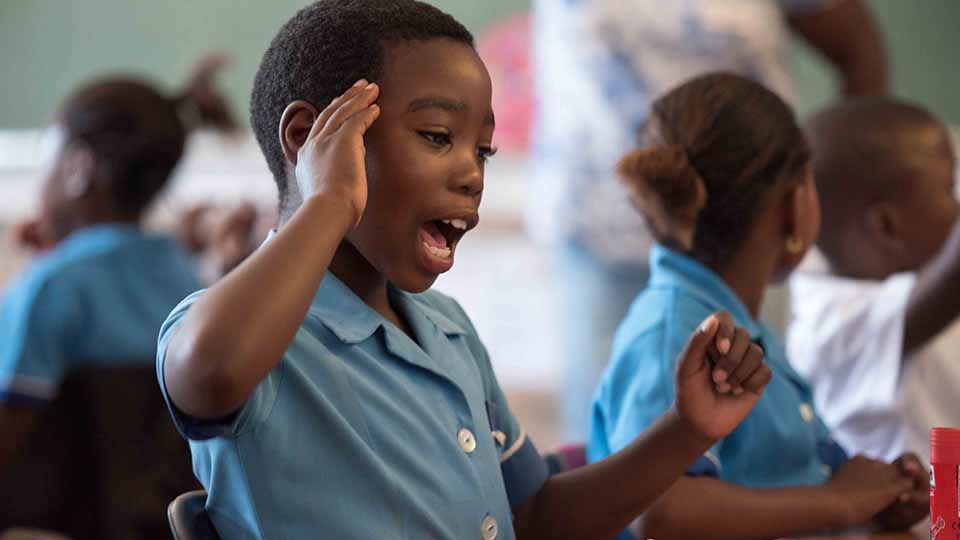 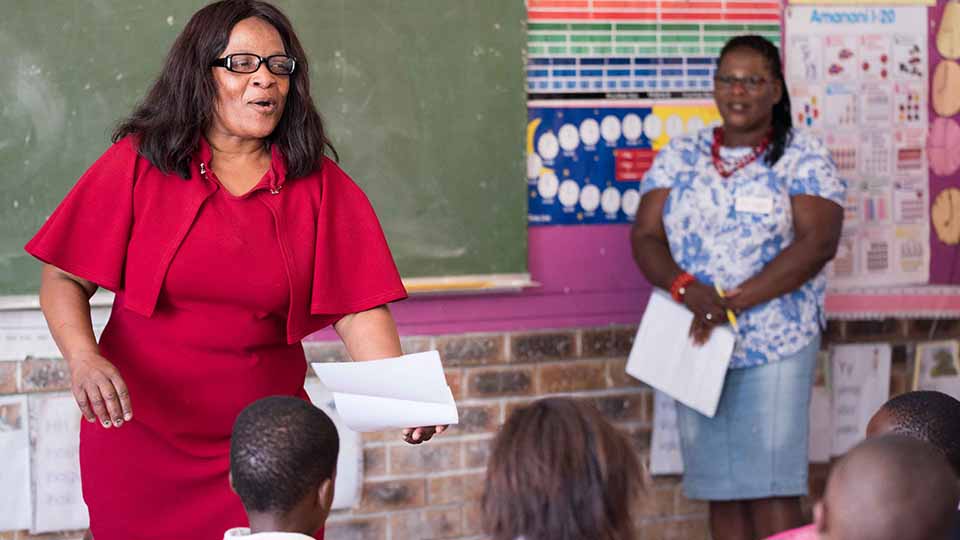 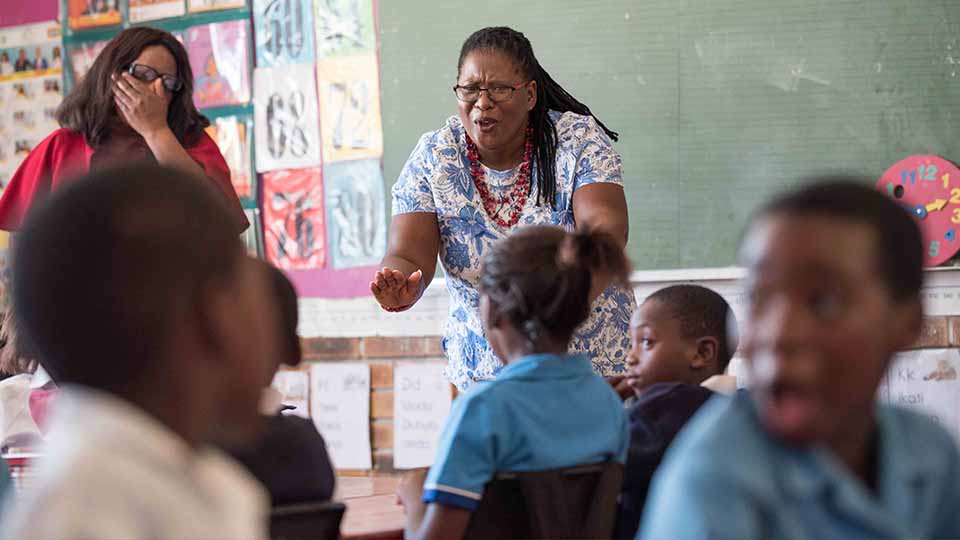 Mr Davendra Rampersad (the Circuit Manager at Metropole East Education District) highlights the advantage of having two dedicated mentors thanks to the Edufundi programme. “Mentors are holding the hands of the teachers and making an impact IN THE CLASSROOM for a full day once a week. This makes a big difference in taking the teacher to the next level,” says Mr Rampersad. “Because mentors work in the classroom they are getting the classroom practice right, but this is also improving how the school functions by adding to a better culture. The sense of excitement in the learners and teachers all adds value, and it shows in the results.

“You can also see the fantastic relationship that exists between the mentors and the teachers, and the LLAC workshops have moved the bar for the SMT,” adds Mr Rampersad. “In meetings they are now not just discussing problems, they are sharing solutions and how they as a staff can take things further, and that is so good for me.”

The transformation that the Edufundi team has witnessed at the school has been dramatic. “At first it wasn’t an easy journey. People were reluctant and felt intimidated to have someone in their class,” recalls Tandiwe Mguli. “But we started building that trust relationship (supporting, not policing) by talking about challenges and then asking, ‘How can we work together to solve these challenges?’ The foundation started there – it was organic.”

For Principal Mtimba-Dube, however, the incredible growth she has seen in her school’s learners and educators is fueling her determination to guide Ludwe Ngamlana to even greater heights. “What makes me enjoy teaching is to see them understanding that they are not just born to be ordinary – they are born to do extraordinary things and they are capable of that. There is no-one like us in Khayelitsha. It is a place that is welcoming, where you would like to belong.” 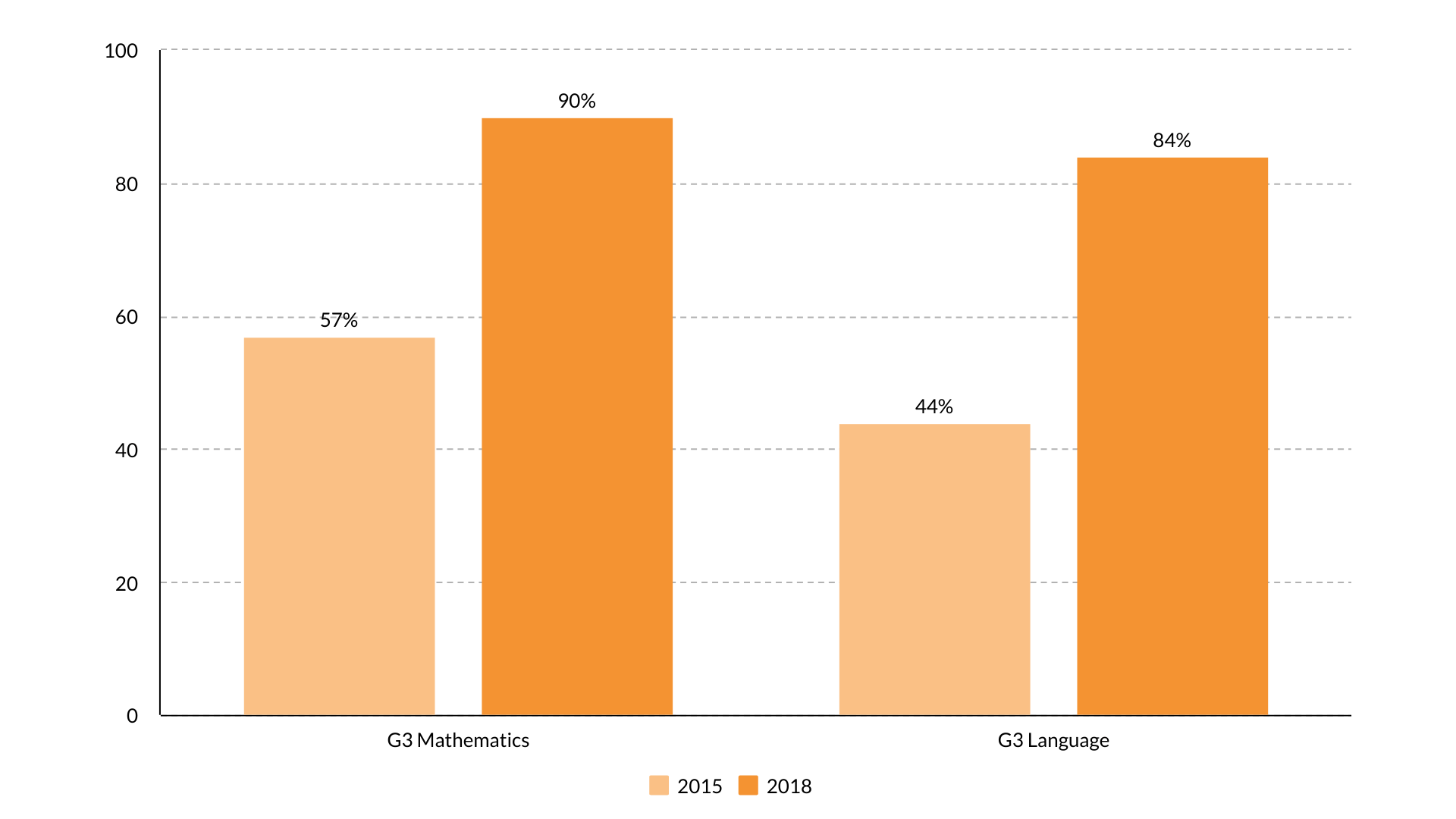 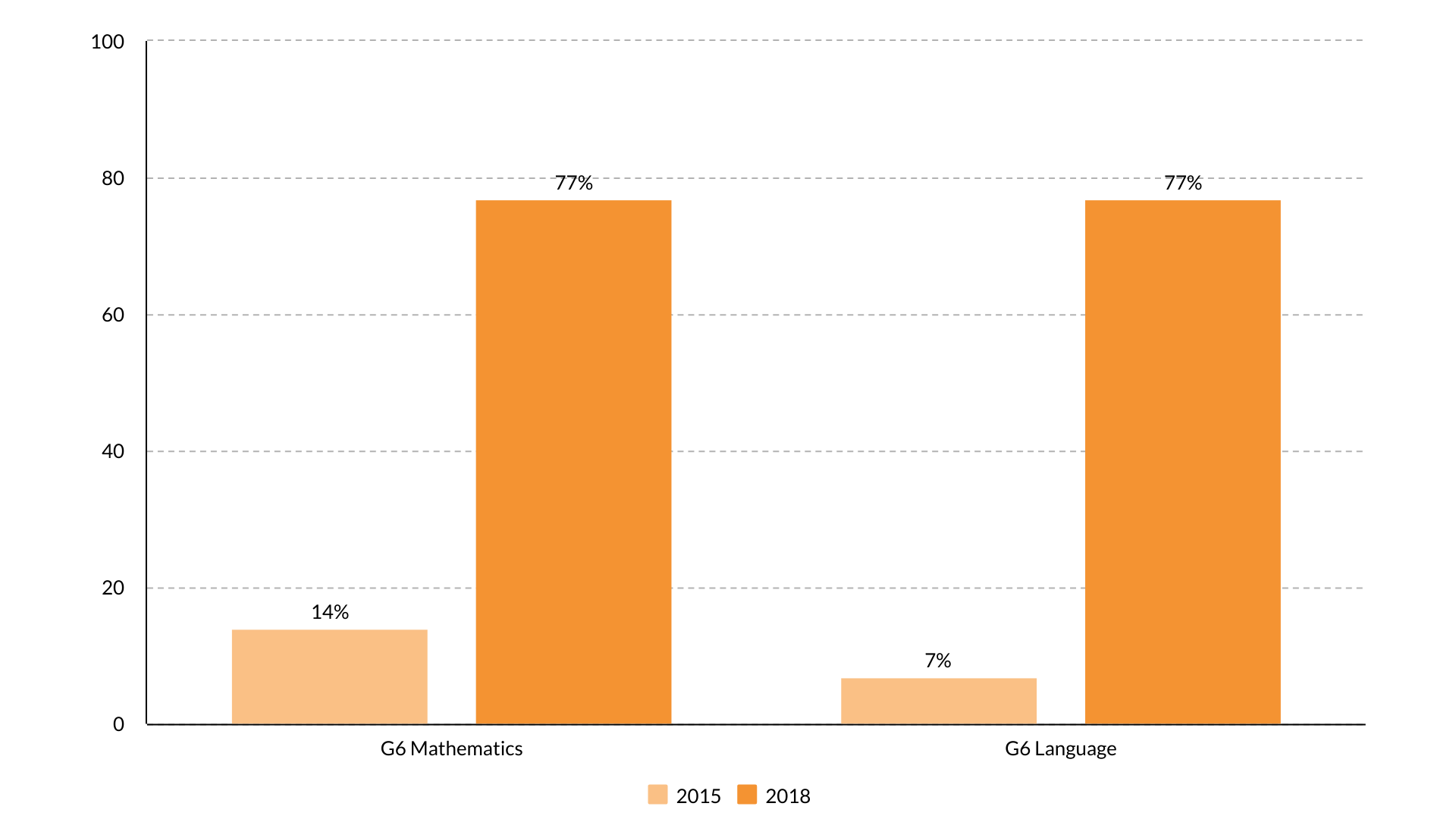