Finding my Strength in Lockdown - Edufundi

At the onset of Lockdown, Lungelwa was confused and afraid. However, in the best interests of her children, she had to conceal her fears and comfort them.

Helping the community in Lock Down

While homeschooling her son (9) and daughter (14) she could not stop thinking about her learners and her community who were struggling. Her feelings were so intense that she did not give a second thought and responded to a call for teachers to support volunteers at her school to cook meals and feed the community.

When explaining what she did, Lungelwa said, “I volunteered myself to go and help by the school for the feeding of the learners. But unfortunately it wasn’t only the learners who came to our school, also the community. I would also even ask people around me and my neighbours and tell them to go and get food at school. We observed the COVID-19 regulations with social distancing, sanitising and screening of those who came to the school.”

Finding Opportunities for Learning and Support

Alongside this, Lungelwa had already started a WhatsApp group with her learners’ parents and although she tried to send activities through this platform she quickly realised that there were two clear barriers:

Not all parents had cellphones
Those who did, did not have the data needed to download the activities

Lungelwa saw the feeding scheme as an opportunity to encourage learning at home and ensure no students were left behind. She used the Department's website and reached out to her Edufundi mentor for suitable worksheets so she could download and print them. Once she had physical copies of the worksheets she could hand out work packs to parents and learners when they came to collect food from the school.

Lungelwa explains: “I downloaded activities from the Department website and printed activities that my mentor gave me. I would go to school, print, staple together and prepare packs for the following day. The Learners came on certain days – mostly on days they were feeding – I would give them the packs and then give them a due date to hand the work back.”

In addition, Lungelwa started to use WhatsApp to let the parents know that she had prepared these packs.

However, the parents who didn’t have WhatsApp wouldn’t come to school to get the packs she had put together. So, she utilised the parents and learners who did come to act as messengers. Excitingly, the news spread by word of mouth and engagement increased.

Lungelwa said her learners responded positively and would come and get the work, as well as bring their work back as they were asked. Now that everyone has returned to school,  even though there are some gaps in their knowledge, these gaps are smaller and more manageable and learners are not starting again from scratch.

Adapting Back into School

When schools returned Lungelwa was called upon to support her colleagues in Grade 7, even though this wasn’t her grade. She took up this challenge willingly and graciously, and enjoyed being able to support other learners. Lungelwa was so grateful for this opportunity because it lifted her spirits.

She says, “It wasn’t difficult for me as the Grade 7 learners are a bit more mature… I actually taught some of them in Grade 4 so I was able to teach some of my old learners.”

Lungelwa back in school with her grade 5 learners

She could also see that learners were scared when they returned to school with the new rules, regulations and social distancing. The learners found small things, like not being able to share their stationery, a challenge, but Lungelwa’s caring nature supported them through this and she made sure learners knew what to do and how to behave while adapting to the ‘new normal’.

Lungelwa was overjoyed when her Grade 5 learners returned. One of the positive things that came from social distancing is that now her class is split into two smaller groups according to their ability. The first group are the more advanced learners, whilst the second group are those that need more support.

Her second group of learners who needed more intervention have blossomed during the new normal because of the smaller number of students, meaning she could give them more attention. These learners gave her the most joy because they engaged without any inhibitions.

Lungelwa said, “My highlight is my second intervention group; they are doing well because they are alone and compete amongst each other. Even those that were lazy to answer in class, they now have that courage to answer and they are also writing better. They are happy when you compliment them when they are doing good!” 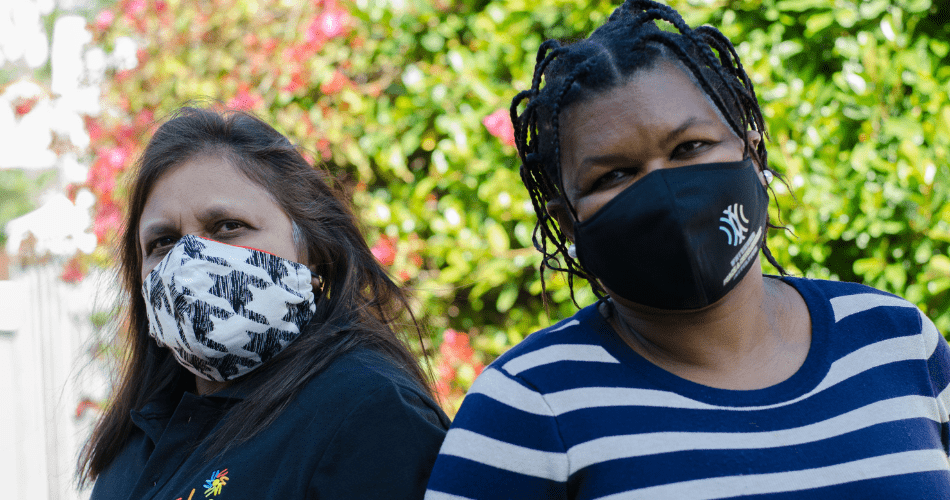 She continued by saying, “It makes my life and their life easy and now you can prepare the lesson according to their level and it gives us [teachers] time for that individual attention.”

It is clear that Lungelwa’s love and compassion has shone brightly during these unprecedented times. Her HOD, Mr Nocanda, showered praises upon her, stating that he never once heard her complain, and that she was ever willing to take on any task.

In a moment of reflection, Lungelwa said, “What I have learnt this past seven months is that life can change  any time and we must stay calm, stay positive and see the good side of every situation we are in. I hope we can continue these small classes.”

*Lungelwa is supported by Edufundi mentor Sylvie Moodley. Edufundi is a non-profit organisation that provides structured in-classroom mentorship and support to teachers and leadership teams in under-resourced primary schools across South Africa. Lungelwa joined the Teach Like a Champion Programme at the start of 2020.